This section documents the improvements that were made to the NERPM-AB model since the adoption of the model as part as the “Path Forward 2040” Long Range Transportation Plan. The improvements focused on improving its usability related to runtime, user’s catalog interface, and model usability

The investigation of alternative methods to reduce system run times focused on the highway network assignments and global feedback iterations. After investigating several different options for reducing runtime the following improvements were made:

The transition of model outputs from one feedback loop to the next one and feedback loop termination criteria were adjusted in the new model. The model has been set up such that the weighted-average volume for each link is calculated at the end of each loop, based on the current and previous feedback loop flows. These averaged volumes are used to generate skims for the next iteration of the model system and are fed back to the demand models (DaySim).

In addition, rather than terminate based on a fixed number of iterations, the model has been set up to terminate the feedback loops if both of the following criteria are met:

The net effect of these changes are that the model runs one feedback loop less than the original model for the 2010 baseline scenario.

The model currently runs AM and PM assignments in sequence; however, it will be able to run them in parallel with minor changes in the model. In this case, the model should know which computer logical processor is the first one used for AM assignment (also which one is the first one for PM period). The interface has these two keys now and, since they are not run in parallel, the value for them should be higher than number of computer logical processors. The default value, therefore, was set to 25, which is suitable for any machine with up to 24 logical processors.

The assignment convergence criterion was changed to the accepted standard practice of relative gap. In addition, the maximum number of iterations was increased from 50 to 150, allowing for greater accuracy in the assignment process. The model is setup to use a tighter relative gap in the highway assignment after the first loop. Following best practice recommendations for regional highway assignments, it is recommended that this relative gap be set to 0.0001. The user may increase or decrease the relative gap, depending on the accuracy level required for the analysis under consideration. Figure 7-2 shows that the relative gap used after the first feedback loop was added to the interface as a key controlled by the user.

If the user wants to save the congested path files, they can choose the option to save the path file for a particular period. The paths are saved in an extra highway assignment run at the end of the model based on the final congested network. It should be noted that Cube Cluster does not support the use of multiple logical processors for path saving; therefore, this step takes a bit longer than would a normal assignment that can be distributed across processors.

Table 7-1 lists all the fields in the loaded network files. The two columns on the right lists the fields associated with the links which the user selected in the "select link" option shown in Figure 7-3. The yellow rows on the table are used in the calculation listed on the last row of the table and calculates the total link volume.

Several steps in the trip distribution part of the model are no longer needed.

Model operations previously used to combine trip tables are no longer necessary because DaySim uses its own set of procedures for creating trip tables from trip lists.

The validation base year key (Valyear) is not read by the model and was removed from the catalog interface. All other keys in the interface are needed.

Table 7-2 shows the run times based on a 2015 vintage workstation with 8 logical processors before the changes were made and the run times after the changes, with various settings. Comparing the rows shaded in orange, the changes made to the model decreased the run time by more than 9 hours, a 44 percent improvement, for the base year model (2010), using the stricter relative gap and without path saving and select link analysis. The run of the same model with select link analysis for AM and PM periods and saving path file for AM period ran for 16:27, using the stricter relative gap, which is reasonable. 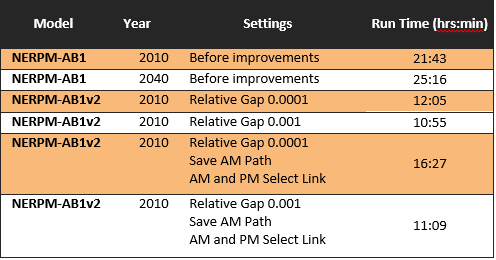 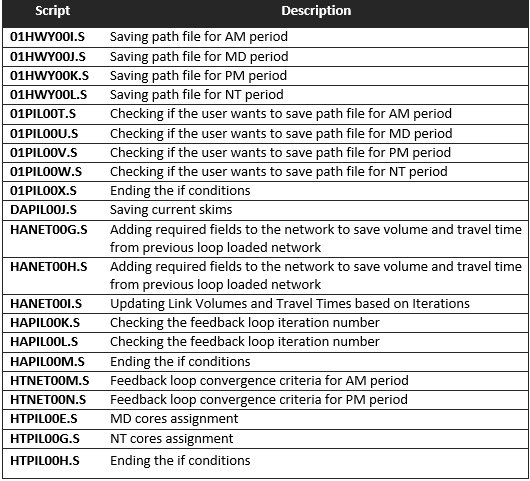